When did Homo sapiens first reach Southeast Asia and Sahul?

An interesting article When did Homo sapiens first reach Southeast Asia and Sahul? by James O'Connell et al appeared the Proceedings of the National Academy of Sciences of the United States of America (PNAS) of May 2018. The Abstact follows -

Anatomically modern humans (Homo sapiens, AMH) began spreading across Eurasia from Africa and adjacent Southwest Asia about 50,000–55,000 years ago (ca. 50–55 ka). Some have argued that human genetic, fossil, and archaeological data indicate one or more prior dispersals, possibly as early as 120 ka. A recently reported age estimate of 65 ka for Madjedbebe, an archaeological site in northern Sahul (Pleistocene Australia–New Guinea), if correct, offers what might be the strongest support yet presented for a pre–55-ka African AMH exodus. We review evidence for AMH arrival on an arc spanning South China through Sahul and then evaluate data from Madjedbebe.We find that an age estimate of >50 ka for this site is unlikely to be valid. While AMH may have moved far beyond Africa well before 50–55 ka, data from the region of interest offered in support of this idea are not compelling.

The full article appears here.
Posted by Paul Mackett at 11:17 No comments:

An interesting article titled 65000 Years of Isolation in Aboriginal Australia or Continuity and External Contacts by Michael J. Rowland appeared in the Journal of the Anthropological Society of South Australia of· December 2018. The Abstract follows -

Recent dating of archaeological sites across northern Australia suggest that
Aboriginal Australians may have arrived on the continent by 65,000 years ago or
earlier though other general reviews propose a more conservative arrival date of
around 50,000 years. Regardless of when they actually arrived, the people of the
late Pleistocene landmass of Sahul (mainland Australia, Tasmania and New
Guinea), which were only separated by rising sea levels approximately 8000
years ago, likely shared some aspects of a common history over a period of
perhaps as much as 50,000 years. It would seem unlikely that this shared
community of culture and ideas would have ended abruptly with the rise in sea
level. Early commentators, operating within social evolutionism and diffusionism
frameworks, argued that much of Aboriginal culture was developed through
external contact since Aboriginal culture was too ‘primitive’ to have developed
higher level cultural traits. Subsequent reaction to this negative view has tended
to limit further enquiry. More recently, it has been recognised that
transformations occurred in Aboriginal societies across Australia particularly in
the mid to late Holocene which have been attributed to population growth and
internal social change (‘intensification’), environmental change and/or external
contacts. This paper reviews evidence for external culture contact with an
emphasis on the Queensland coast via the Torres Strait and Cape York. It is
apparent that contact did occur though the timing and extent of impacts on the
development of Aboriginal culture has yet to be fully understood. It is important
to periodically review what innovations might have reached Australia from
external sources (and vice versa) as new evidence and theories develop. This will
enhance an understanding of how Aboriginal peoples coped with and adapted to
the substantive transformative processes of the contact and post-contact eras
which is the theme of this volume.

The full article is available here.
Posted by Paul Mackett at 10:48 No comments:

The claim area is west of and adjoins the Hann Tableland National Park in Far North Queensland.

The Muluridji People are descended by birth or adoption from the following ancestors:

Posted by Paul Mackett at 21:21 No comments:

I was going through some Reveille magazines that were inherited when my grandmother died years ago. The article titled A.I.F Aborigines : How Many appeared in the issue of August 31, 1931. A link to a copy of the article is here.

A second article titled Lever on Britain : Prisioners Suffer appeared in the December 31, 1931 issue of Reveille and refers to Douglas Grant. The article is available here.
Posted by Paul Mackett at 23:21 No comments:


The claim area is roughly centred around Quilpie, Queensland.

The Mardigan People who are members of the native title claim group for the Application are currently described as the biological descendants of the following people:

The purpose of Authorisation Meeting #1 is to:
(1) Consider anthropological materials and legal advice relating to an individual described as ‘Jenny, mother of James Pegler’ and her descendants;
(2) Subject to (1) above, authorise the amendment of the claim group description for the Application to include the descendants of Jenny, mother of James Pegler.
Appeared in the Koori Mail dated February13, 2019

Nancy Pegler H/C was residing in Cunnamulla with her husband James Pegler H/C, Station worker, and two children in 1941.

Ward, Mayneside - Letter (21.12.1911) to Mr J Payne, MLA regarding working conditions, agreements and wages of Aboriginals which he notes 'is little better than slavery'.
Attached to this letter are two lists, one being a List of Halfcastes. Among the Names mentioned is Jimmy Pegler (of Thargomindah).
Posted by Paul Mackett at 19:38 No comments:

The Kabi Kabi First Nation Traditional Owners are those people:

(b) Who identify as and are recognised as members of the Kabi Kabi First Nation Traditional Owners in accordance with the system of traditional laws and customs.
Posted by Paul Mackett at 19:35 4 comments:

The following books contain a wealth of genealogical information.

Of Marriage, Violence and Sorcery by David McKnight published 2005
Contains numerous sections of genealogical charts of people from Mornington Island  and descriptions of events and the people involved. Some pseudonyms are used but most names are the correct ones. I have checked this with other records.

Lives of the Papunya Tula Artists by Vivien Johnson published 2008
Contains detailed genealogical information of the artists and their families.

Posted by Paul Mackett at 19:58 No comments: 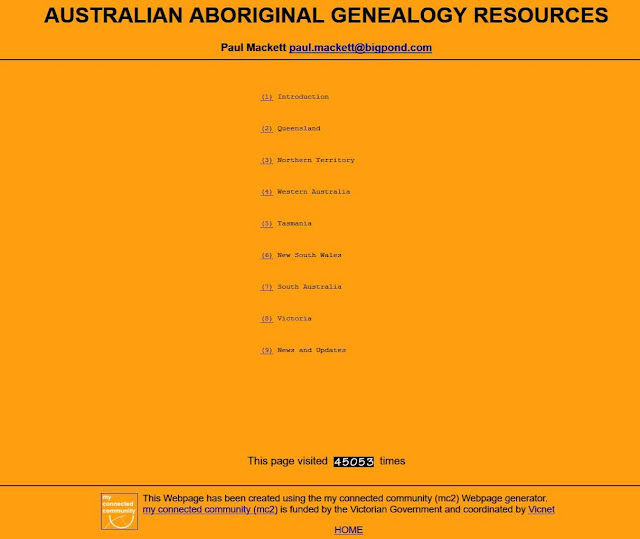 This was the VICNET Home page in May 2012 just before the change over.

Just placed here for historical reasons.
Posted by Paul Mackett at 15:07 No comments: